Protein
29.9g / 38%
Carbohydrates
24.6g / 30%
Fats
11.4g / 31%
The energy content breakdown shows the amount of the macronutrients (i.e. carbohydrate, protein and fat) contained in one serving of the recipe and their relative contribution (in %) to the total energy content of the serving.

Not the right choice? Go back
Asian - style Family incoming

Teriyaki chicken is commonly found in Japanese restaurants in Malaysia — a dish that suits the Malaysian palate as it is chicken drenched in an appetizing tangy sweet sauce, which goes so well with fluffy white rice. Teriyaki is a method of Japanese cooking in which sliced meat is grilled, roasted or broiled in a special sauce made from soy sauce, sugar and mirin for a delectable sweet and savoury taste. The word “teriyaki” is derived from the word “teri”, which refers to the glaze of the sauce, and “yaki” , which refers to its cooking method.

To prepare this dish, you’ll need to start by preparing the sauce first. Whisk together MAGGI® Oyster Sauce, water, thick soy sauce, brown sugar, vinegar and ginger juice in a bowl, then set it aside. Next, cook the chicken by heating some oil in a frying pan. Brown the chicken on both sides over medium heat as a high heat will not cook through the chicken and burn it instead. After the chicken is cooked, set it aside and pour in the sauce that was prepared earlier. If you want the teriyaki chicken sauce to have an amazing glaze and thick texture, do reduce the mixture when cooking — bring to a boil and then reduce the heat to simmer until sauce has thickened and reduced by half, this process may take up to 10 minutes. Finally, add in the chicken and let it cook for 2 minutes.

Tasty yet nutritious, this teriyaki chicken dish is bound to be a favourite among your family members, it could satisfy even the fussiest eater at the table! Head over to MAGGI® to discover more nutritious and tasty recipes such as yogurty chicken sambal wrap, steamed fish fried rice and harmonious vegetables.

This dish has been optimized for 8 servings. Quantity and times may need to be varied. Here you can find more information about adjusted portion sizes: 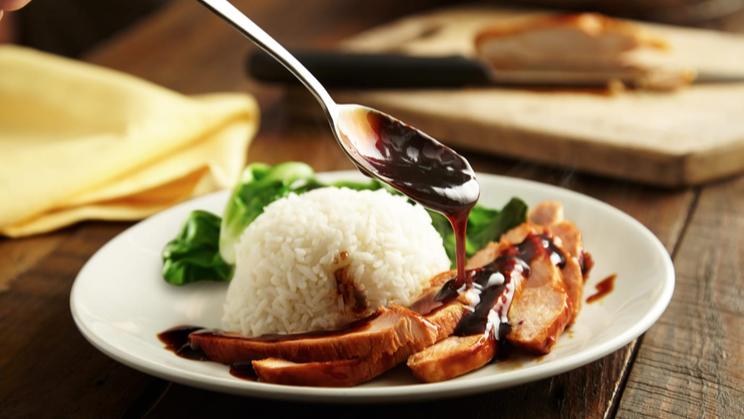 In a small bowl, whisk together MAGGI® Oyster Sauce, water, thick soy sauce, brown sugar, vinegar and ginger juice for the sauce. Set it aside.

Heat the oil in a frying pan. Brown the chicken on both sides over medium heat. Don’t set the heat too high otherwise the chicken will not cook through before burning.

When the chicken is done, set it aside.

In the same pan, pour the sauce that was whisked together earlier on. Simmer the sauce until it slightly thickens.

Finally, add in the chicken and let it cook for 2 minutes.

Plate the chicken, pour over the sauce and serve with blanched vegetables. Enjoy!